About the problems of narrow-gauge lines – through the cinema 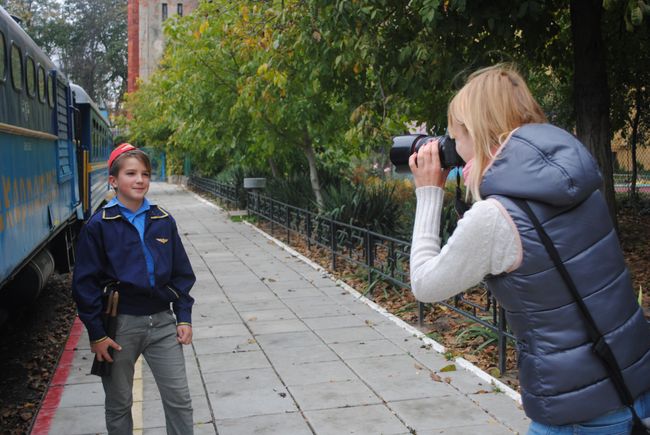 Within 25 working days, the crew plans to collect video material in four regions of Ukraine and in Switzerland.

The shooting of a documentary film about the history and present-day narrow-gauge of the two countries began in Uzhgorod. It is here that the shortest railway in Ukraine is the shortest – children’s railway. It reaches a length of only 1200 meters, and began to build the railroad back in 1945. Today, on its base there is a circle where students can become young railwaymen. The main character of the film, the student Oleg GUDZELYAK, came to visit them. The young man (by the way, participant of last year’s photo contest “The Day”) travels by rail very often and quite cares about the fate of narrow-gauge railroads, because he is convinced that they need not only to be saved, but also to be restored.

“I’m interested in the railroad since childhood, it’s such a vital hobby. Actually, therefore I often travel, get acquainted with a large number of people, study the history, realities that we have on the railroad. In fact, the railroad is not at all a conductor or carriage at the station. It is a huge and powerful structure that operates 24 hours a day and seven days a week for over 150 years, and with it the human destinies, history, life in general are very closely connected. Especially in less populated areas. Narrow bars are such a small copy of the “big” railroad, there are very few of them. Over the past two decades, more than 1,000 km of narrow-gauge railways have been eliminated, and we can not afford to safely contemplate this process. Actually, this tape will have one chance to draw attention to the problems of narrow-gauge bars in Ukraine, to bring a discussion about their future to a qualitatively different level and, together with the public sector, local self-government bodies and state authorities, to develop solutions that will give the narrow-gauge a second life, “- Oleg Gudzlyak, The Day. According to the scenario, the guy will travel to Ukrainian narrow-gauge railways in four oblasts: Transcarpathian, Rivne, Kirovograd and Ivano-Frankivsk. And then he will get acquainted with the railway-restorer Christoph Bachmann, who at his own expense reconstructed a unique train of the XIX century. Together they will go to Switzerland, where they will be able to see how the narrow-gauge movement operates today.

As the author of the idea, co-producer and director of the tape Alexander NEDBAYEV said, this will be a film not only about the technique, but also about the fate of people, their lives. In particular, narrow-gauge railways in Ukraine are, in some cases, the only transport that can be reached in distant villages for bad weather.